There was literally something for everyone at this year’s Music Tastes Good Festival at the Marina Green Park in Long Beach, CA. Dance/EDM? Check. Hip-Hop? Check. Indie Rock? Check. Dad Rock? Check.

Long Beach pride simply ran through this festival. From the local chefs and restaurants to the liberal use of “what up, Long Beach!” to hype up the crowd, it was clear that people were both surprised and delighted to be there.

Both days I arrived around 2pm. Because I was writing full articles for mxdwn.com, I had my first “I’m with the press” experience at this show and, let me tell you, it was not too shabby! I took a moment to stop in at one of my favorites, Vinyl Williams, who’s post-punk and psych sounds were reverberating off the Convention Center parking lot as I checked into the festival. After catching Fledloyd, I took in the scenery. The taste area was available to a select few who spent the extra money, but there was just as much to see and eat. I stopped by The Attic’s booth and chatted with the attendant, who was giving out free samples of their famous, mouthwatering mac n’ cheetos — to which I am no stranger — and I told her The Attic was my neighborhood hang. She gave me a free t-shirt with said mac n’ cheetos on it and I happily made my way to the Long Beach Stage where BRONCHO was about to play.

BRONCHO had a definite cool factor as they played their reverberating garage rock. Singer Ryan Lindsey kept on making this comical motion — as he rocked his body back and forth, he’d play a chord then raise his hand with his finger pointed up. The first few times it seemed normal, but then he’d keep doing it after the songs ended so the audience started laughing, particularly during “What.”

Another highlight of the day were indie rock outfit Alvvays. As a recent fan, I was looking forward to hearing their new material off Antisocialites and boy did they deliver. The sound and vocals from Molly Rankin had the audience in a dreamy daze. While they played fan favorites like “Adult Diversion,” their new tracks were the stars of the show. “Not My Baby” and “Dreams Tonight” both have beautiful melodies and made the most impact to me during their set. Oh, and can we talk about rotating main stages for a second and why more shows aren’t using them?? As one band was playing, in the back another would be setting up unbeknownst to the audience. At the end of the set, the stage would rotate, giving us a glimpse of a very Long Beach scenery — palm trees and, in this case, a beautiful sunset.

Of Montreal and !!! (Chk Chk Chk) from day two will have to battle it out for most energetic performance and audience. When of Montreal singer Kevin Barnes took the stage, he was wearing a blonde wig and colorful women’s outfit, which I suppose is pretty normal for them. Their performance completely blew me away. Truthfully I only knew a handful of their songs and that memory was growing hazy. But, I it all came back to me when I heard “Suffer for Fashion” and those lyrics came to me and the rest of the audience as we sang, “it’s not supposed to happen like that… not like that.” People were jumping up and down to the highly danceable set and Barne’s voice was simply stunning. It was definitely THE performance of the night.

I stayed to catch British early shoegaze group Ride and had to back away from the stage because, My Bloody Valentine style, their music was a glorious wash of strong, loud sound. I also caught headliners Ween and while there were some funny moments mostly from the lyrics I heard in the set, they weren’t really my jam. Regardless, lots of people (probably your dad) were there to see Ween and they really did do it all… there was even a theremin on stage that I heard at one point! They ended their set on a soft note with the song, “Fluffy” (yes pun intended).

The next day I arrived still tired from having been up until 4 in the morning to write my Day One article for mxdwn. But I was super excited to see one of my new favorites Jay Som and get down to some stellar indie rock. The Bay-area foursome kept things cool and casual on the stage — it felt like we were just looking in on their rehearsal or jam session. The band members themselves were just looking at each other, smiling and being goofy, but man could they achieve that hazy, lo-fi sound that many indie bands can only dream of. They played my favorite from them, “Turn Into” and I head a new favorite as they played “Out Red Door,” which started softly and lead into a fuzzy jam session. The group posed hilariously as the stage rotated for the next band and the small but engaged audience laughed.

As I mentioned before, !!! definitely competed with of Montreal for most energetic set. Singer Nick Offer did an incredible job of engaging with and hyping up the crowd and joined the audience from the stage as many times as he could. Some of my favorites from the set included “Pardon My Freedom,” even if he was telling me to sick his dick. The song blended punk and electronic together in a way that was angsty and rad. But I also couldn’t help but feel the groove for “Freedom ’15,” a funky dance track.

Since I was on assignment to cover Digable Planets and Los Lobos, I wasn’t able to catch much of Peaches, but from what I saw she was wearing a pink feathered outfit and words like “this song is about my huge vagina,” or something to that effect, I’m sure made for an engaging performance.

Los Lobos had another dad rock audience, but their performance was filled with personality and George Lopez jokes too. What was cool about their set were the extra instruments they brought out on the more cultural songs like “Stained Behind the Glass” in which a harp player came out, and banda-based song “Rio de Tenampa” which called for rather enthusiastic clarinet, trombone and sousaphone players. They continued on as the stage turned, revealing tUnE-yArDs, who’s name spelling reminds me of how middle schoolers used to and maybe still do type on their iPhones and myspace.

To be honest, I was half annoyed that I would have to watch tUnE-yArDs, as my hazy memory of them included them singing “don’t you wanna be a rasta,” channeling my disdain for reggae. However, I’ll be the first to admit that I was just being judgmental, because their set was one of the most entrancing ones of the festival. The experimental-folk project of Merrill Garbus, tUnE-yArDs creates their sound with the use of vocal and drum loops that are set up on the spot. The band might almost be considered honorary shoegaze because of the time they spent looking down at their feet. It was incredible to watch this trio — Garbus would set up a loop featuring various harmonies and melodies, put it all together, and sing over it at times. The drummer would lock right into the rhythm too which I’m sure was not an easy feat. And while it’s probably not the kind of music I’d listen to in my spare time, it sure as hell was interesting to watch.

But the Long Beach stage was the most crowded it would be for final headlining act Sleater-Kinney. While this band has been around since the ’90s and Carrie Brownstein and Corin Tucker were integral in the riot grrrl movement, they’re probably even more popular now just because everyone knows and loves Carrie Brownstein in Portlandia. And while Tucker was the main singer, Brownstein certainly commanded a lot of attention with her high kicks and expressionist face. A lot of people seemed to know the lyrics and really got into the songs. Some of the more pop-y songs like “One Beat” had everyone jumping up and down. Brownstein’s skills on the guitar were spot on for their noise-rock in “Surface Envy,” as the two guitar players rocked hard and loud into the night.

The sets each night ended promptly at 10pm and everyone cleared out promptly each night. Overall, it was a smooth and successful event that seemed to draw in a lot of the L.A. crowd, and I ran into people I knew from CSU, Long Beach, L.A. shows and even some family! Events like these give me even more prideful of being a Long Beach resident, and I look forward to what lineup Music Tastes Good will reveal for next year!

Check out my full articles on mxdwn:

Music Tastes Good 2017 Day One with Ween, Of Montreal and Alvvays 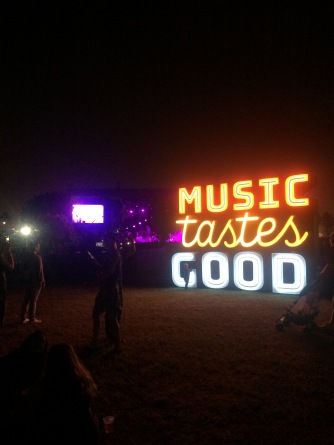 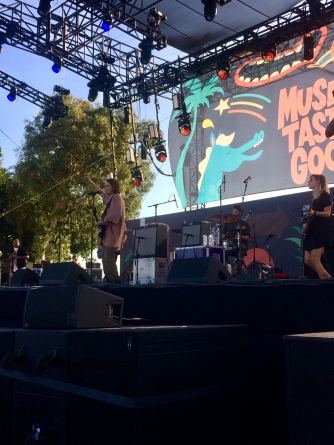 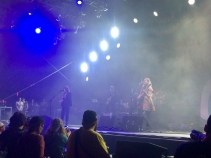 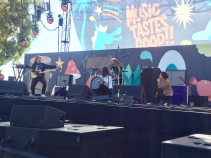