Compared to his previous releases Pool and Slow Dance in the Cosmos, Aaron Maine’s project Porches shows simplicity and restraint in his latest electro-pop-driven album, The House. With this new chapter, in the majority of the tracks Maine ditches the auto-tune he picked up in Pool and favors his soulful, uninhibited vocals. While there are several forgettable tracks on the album, there are some stunners that I just can’t get enough of right now.  END_OF_DOCUMENT_TOKEN_TO_BE_REPLACED

Chill all summer to these beach-y jams filled with California vibes. This playlist is brought to you by For Swooners Only and Indiecation! END_OF_DOCUMENT_TOKEN_TO_BE_REPLACED

Do you ever find yourself feeling comforted by a song that has a dark side, or seems slightly eerie? Yeah? No? Maybe it’s just me. But now that Mercury is in retrograde again, this playlist is just dying to be posted.

Take a listen! You might just find yourself oddly comforted.

What song strangely comforts you? Leave it in the comment!

Pool was released earlier this year by New York-based electro-indie band, Porches. When listening to this album, I’m amazed at how much this artist has evolved since the folky-indie-garage rock style of his first album, Slow Dance in the Cosmos.

Pool definitely embraces Porches’ indie-electronic side, as all the tracks are heavily synthesized. The album crafted by frontman Aaron Maine also features frequent supporting vocals from singer/songwriter and girlfriend, Frankie Cosmos. Maine’s distinctive soft and low voice is at times auto-tuned, although personally I prefer his uninhibited voice. END_OF_DOCUMENT_TOKEN_TO_BE_REPLACED 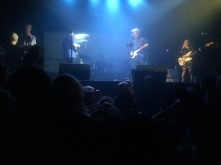 Porches and Alex G performed to a sold out show at the Echoplex last Tuesday, March 29. Porches had initially caught my attention with their latest release Pool which is a rather danceable indie electronic and rock album, and quite a drastic shift from lead singer Aaron Maine’s earlier folk and garage rock works.

While Porches sold me on the show, most of the crowd appeared to be Alex G devotees. I had only recently started listening to him just after purchasing the ticket. I’m glad I did, because amidst the recently released lo-fi album, Beach Music, hidden gems like “Thorns” and “Brite Boy” are some new favorites in my Indie music repertoire. END_OF_DOCUMENT_TOKEN_TO_BE_REPLACED

Here’s a playlist that encourages me to express myself freely and truly embody courageous vulnerability. Please enjoy & share!