This past Thursday I headed to the Glass House in Pomona for the first time to catch a powerhouse of a lineup featuring Boyo, Sadgirl, Slow Hollows, and Surf Curse.

I arrived in time for the last few songs of Boyo’s set and then headed upstairs to view the rest of the show at a safe distance where I could actually see since the floor was already packed and I fully expected the moshing to break out during Sadgirl’s set. And I was not wrong! They delivered an impressive, high energy surf rock set complete with jangly guitar solos and ’50s rock vocals. Next Slow Hollows took the stage, this time featuring a sax and trumpet player on several of their tracks as well. They played mostly songs from their new album, Romantic, which features mostly mellow indie styles with deep vocals.  END_OF_DOCUMENT_TOKEN_TO_BE_REPLACED

This past Thursday I ventured to the Pico-Union neighborhood of Los Angeles to catch Black Marble, co-headlining with Uniform at the Union—a nightclub tucked away between a residential neighborhood and shops, that also allows the audience to get up close and personal with the performers.

END_OF_DOCUMENT_TOKEN_TO_BE_REPLACED

This President’s Day (#notmypresident), I appropriately caught an all-female lineup at the Echoplex. Stef Chura and Alice Bag opened the show for Washington D.C. based post-punk outfit, Priests.

People began to filter in during Stef Chura, a Detroit based indie rock group as the trio filled the room with dreamy lo-fi sounds. The crowd was really excited to see L.A. punk icon, Alice Bag on the Echoplex stage. She was one of the founding members of the Bags, and was really essential in putting the Los Angeles punk scene on the map. Born and raised in East L.A., Bag’s music and lyrics are reflective of her upbringing, and her message inspires political activism. She sang some originals from her 2016 solo album, as well as some songs from The Bags, including “We Will Bury You” – a message she dedicated personally to the Tump administration. Her daughter even joined on stage as a backup singer, and it was a tender moment when Alice Bag made a brief but touching shoutout to her. In between songs, she spoke about feminism, consent, education, and Chicano and human rights. It was quite a movement of a set, and she and her band really brought the energy to match through catchy, punk rock tunes.

END_OF_DOCUMENT_TOKEN_TO_BE_REPLACED

I was pleased to hear about this show for the first time this year, “Midnight Mass,” which caters to the DIY punk scene in Long Beach. With headliners like The Garden and The Spits, and a lineup featuring some of my faves, Feels, Walter, and The Buttertones, and taking place at an artist colony venue “The Packard” on Anaheim and Long Beach Blvd., this Christmas-themed festival was sure to be a huge draw for locals of all ages.

When I arrived a little past 2:00 p.m., the Nectarines were onstage outside to a fairly empty venue. Right away, I noticed that I’d probably be one of the eldest attendees (even though apparently I look 21 ;-)), but I didn’t let that deter me and just made a mental note to step aside from the riff-raff because, let’s face it, my moshing and crowd-surfing days are well behind me. END_OF_DOCUMENT_TOKEN_TO_BE_REPLACED

This past Saturday marked my very first “Play Like a Girl” or “PLAG” experience. This community puts on shows every month featuring female-fronted acts and female owned business. Basically, it’s a way for the L.A. community to get together and honor amazing female artists. All people of all ages are welcome, and if you subscribe to their list, it’s a $5 show every time. END_OF_DOCUMENT_TOKEN_TO_BE_REPLACED

This past Saturday I was amped to see Frankie Cosmos grace the Echo again. This time she brought new friends, iji and Remambran.

END_OF_DOCUMENT_TOKEN_TO_BE_REPLACED

Last night Still Corners performed to a (not-so-still) audience at the Roxy. The first day of fall in Los Angeles was warm, yet gusty, with winds like no other blowing about Sunset Blvd. all through the night. I hadn’t been to the Roxy in over a year, and looked forward to making the trip to this iconic Hollywood institution on a Thursday evening. Many people of all ages from moms to middle schoolers came out to catch this London-based synth-pop group.

I arrived in time for opening act, Kid Bloom. This valley-grown group got the crowd grooving to their psych-pop tunes. Although the singer was stretching a little in his vocal abilities, he did his best to make up for it by running his hands through his beachy shoulder-length hair and lifting his shirt in singing agony multiple times. The crowd didn’t seem to mind. 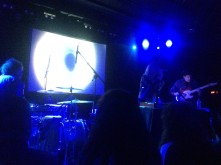 Tour-mate Foxes in Fiction took the stage next and changed up the atmosphere with dreamy visual soundscapes. He appeared to play one continuous piece of music that were three individual tracks and was cut off slightly abruptly by the punk stage manager.

Still Corners opened with Strange Pleasures, and the audience responded almost immediately. Overall, their tracks are largely mellow, danceable at times, but something I’d intuitively sway to. Those who pre-gamed had very different instincts. A small group of people in the middle of the audience made it their mission to take the spotlight from the performers by being loud, shouting requests, bumping into people, and even attempting to stage dive at one point. Another young man slurred comments into my ear for a part of the show, and wouldn’t stop talking until I moved, and even after that onto his next victim. And I know  most of this is my own judgment and even projection. Maybe there’s a part of me that would like to uninhibitedly let loose and feel the music THAT much. But where’s the line between sharing enthusiasm with a performer and being downright obnoxious? I’d love to hear your thoughts! (Yes, YOU!)

Still Corner’s show was absolutely breathtaking, even with the audience distractions. I particularly enjoyed the closing performance of The Trip. They came out for a soft encore and just like that the night was over, and the Roxy spat us out into the breeze-filled night.

My friends and I were rightfully excited to discover this little Downtown Long Beach show, “Shugazi,” featuring great music and scenery atop the Mariott Hotel parking lot. Shugazi was Summer and Music‘s (SAM) inaugural event of this sort, however, SAM is quite familiar with creating music events for the Long Beach Community as their annual event, Buskerfest, attracts many local bands and concert-goers in the area.

We arrived slightly buzzed on rosé, ready to kick-off the Friday night that would begin our girls-only adventure of a weekend. Philadelphia based shoegaze-y alternative rock group Nothing opened the show with ’90’s inspired noisy garage rock sounds while members of Diiv were spotted grabbing tacos from a local vendor. With a  little liquid courage, we took the opportunity to say “hi” before Zachary Cole and Devin had to get backstage. 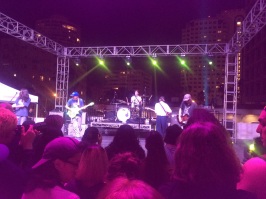 The real magic happened when Diiv took the stage. I’ve seen hem play about 3 times this year, and they seem to keep getting better and better. They played mostly tracks from Is The Is Are, opening with the album title track. They brought a great live energy to the stage, as they swayed and shoegazed about, with the perfect Downtown Long Beach backdrop to support the stage lights. One bummer though was a refusal of our request to play “Valentine,” a song they apparently had not yet learned to perform live. The performance ended relatively early, even with the encore. And with that, the soundtrack to our weekend was found, as we blasted Diiv in the car during our getaway to Morro Bay.

This past Saturday, the Resident was taken over by Beating Lights along with Shop Used // Shop Local, B&P // Beats And Pieces and Beyond the Lines Art Show for a summer afternoon filled with good local music and great vibes!

END_OF_DOCUMENT_TOKEN_TO_BE_REPLACED

This past Thursday, I caught the first concert of the Hammer Museum and KCRW’s “Disappear Here” summer series. I was excited to discover that both Poolside and Tokimonsta were playing this year! END_OF_DOCUMENT_TOKEN_TO_BE_REPLACED