This past Thursday was a real special night in L.A. Mac Demarco, who’s on his way to Coachella this weekend, announced that he was playing a “secret” last-minute show at The Echo for a mere $22 a ticket! I heard the announcement first on KCRW’s Morning Becomes Eclectic Facebook Live video of Mac and friends in their studio.

Mac Demarco’s fanbase continues to grow immensely, and he consistently puts out stunningly crafted indie tracks. I’ve seen him perform at FYF Fest two years ago, and it nearly impossible to catch him at such an intimate venue like the Echo.

Like so many indie-loving locals, I started to research the best way to make this happen. I joined the fan club and got my presale ticket in hand, and started refreshing at 1:59 p.m. I got in! Judging by the Facebook event page, most people did not, and of course many of these tickets appeared later on Craigslist and Stubhub for up to 5x more than the original price. Jerks!

For the lucky few who did get in, we knew we were in for a magical night, and Mac Demarco, along with openers Kirin J Callinan and  Pierce McGarry sure did deliver with lots of comedy and flair.

Mac Demarco played for what felt like an eternity that I never wanted to end. Powered by several glasses of chardonnay and some new cool friends, the theme of the night was “don’t take yourself too seriously, life’s supposed to be fun!” 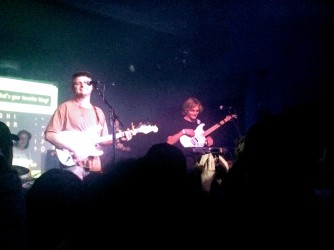 Mac Demarco at The Echo

About 4 or 5 new songs from the highly anticipated “This Old Dog,” which is set to be released on May 5th, (Cinco de Marco) were leaked and they are all stunners. There was a perfect balance of old and new, with faves like “My Kind of Woman” and “Chamber of Reflection” included. Towards the end, the night got blurry, as Mac Demarco stage dove, took a shot at the bar, started climbing things and got into several other antics. It felt like the fricken party of the year!

Here’s him playing “This Old Dog” at the Echo:

Catch him live at Coachella today and next weekend at 5:50 at the Outdoor Stage, or watch his set live on youtube.