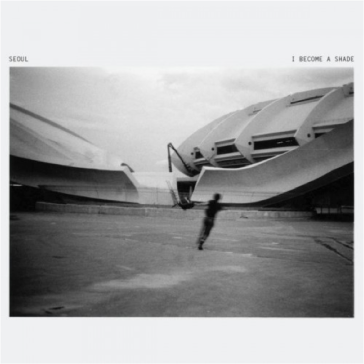 I keep coming back and listening to this stunning album, I Become A Shade by indie dream-pop Montreal band, Seoul. This is one of those albums that really should be listened to in its entirety, as each song’s end leads into the next. The first song, “I Become a Shade” starts with dreamy vocals and ads some M83 inspired inverted arpeggios, this time repeating the verse of the music, then leading into the next song, “the Line” in after less than two minutes, which picks up the tempo of the album.

Next is one of my personal favorites, “Haunt/A Light.” I really enjoy the clear, intentional bass line and diminished to minor dark piano chords just before the vocals come in again. The line “I’ve been living in this miserable city again…” really comes out multiple times in the song, and I just picture a dark city in a haze with men walking slowly to their destinations, until, just before minute four, when it’s all of a sudden a slow dance party, but not for too long, as the song fades with just using piano chords.

Real June is the most “upbeat” song in the album. It’s apparent that this song is their pop hit, and is a little more cheerful than the first couple songs, as the beat picks up and the chorus is mostly voice flips.

This is followed by, “Fields,” which is just under two minutes of shimmering, yet slow instrumental chords repeated, and then resolving, much like an intermezzo between songs. Perhaps it’s turning a new chapter, as White Morning is next on a still soft, yet more positive note—almost like waking up after the first few songs put you to sleep. This song is pretty, but not the most interesting on the album, using pretty straight forward rhythm in the instrumentals, with triplets and syncopations in the voice, not really resolving, just fading out.

“Stay With Us” is next, and is one of my favorites. It’s slow, but danceable, and really demonstrates all the simple but beautiful layers Seoul are able to create that sound so delicate, but really come together. I love the part around minute two, or the bridge that just kind of drops and pulls some really nice melodic lines out of the vocals that just make me want to sing along while swaying my head, “I wait…standing in the hallway…taking off my coat so slow because you don’t want me there…” then to one last verse and chorus and fading out and into the second intermezzo, “Thought You Were,” with two minutes of what sounds like a wind chime effect on the guitar.

There’s a deliberate pause, and then echoes into probably my absolute favorite song on the album, “I Negate.” I’m not sure what it is about the song, but it’s very simple and beautiful, with sliding fifths in the guitar, Seoul’s classic soft vocals as he sings continuously, “I negate…don’t you want to…run again…don’t you want to?” and ending the song with a fade-out of the sliding fifths in the guitar.

“Carrying Home in the Winter” is another kind of intermezzo to me, repeating the same melody and crackling synth for about two minutes, fading again and into the next song, “Silencer,” which is another favorite of mine, which picks up the pace again, primarily in the upbeat chorus. My favorite part, however, has no vocals in the bridge between chorus an verse. That guitar line that slides softly up and down while the bass and drums permeate at half-time, with the synth crescendo-ing on one chord is just really interesting to me. This track is danceable in a really subtle way.

The final track, “Galway,” is an interesting bookend to this album, as the song isn’t really that interesting and is mostly synth, with drums and vocals just fading in and out. It’s pretty meditative. In a way, it’s a statement that says, “This is the end of this album…here is the cool down…acknowledge yourself for listening…”

Check out the full album here: